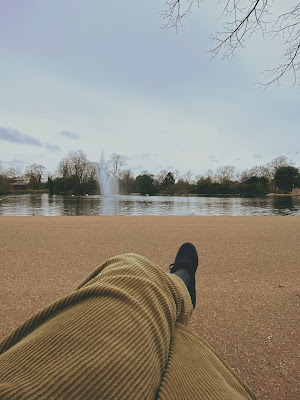 10:03
Happy couple jogging in the park. They’re drunk on a cocktail of oxytocin and protein shakes. They share a penchant for leisurewear. I bet they have a joint Instagram account, where they post pictures with caption such as: “Couples who run together, stay together”. I hope they keep running. Away from me, if possible.
10:09
Man who is shorter than me (this doesn’t happen often). He is dressed in black from head to toe. He is sporting a suspiciously fresh haircut and he’s clearly feeling himself. That makes one of us.
10:15
Man walking three French pugs (they’re all identical). He has a face tattoo (who did you kill while in jail?), tracksuit bottoms tucked into ankle-length sponge socks and a rolled-up beanie hat. I am sure there’s an interesting backstory somewhere there.
10:21
Mother of two accompanied by her ageing single friend. She is forced to push a buggy and engage in a conversation about poo-stained nappies. Her eyes are soulless, a permanently sorrowful grim is stamped on her face - she’s clearly wishing she had stayed in bed watching reruns of Frasier on Channel 4. Motherhood is a burden, especially when you don’t have kids.
10:26
Woman walking a genetically modified Pomeranian squeezed into a leopard print gilet. The dog looks at me, defeated. I look at him, concerned. Bark twice if you’re being held hostage.
10:34
Very blonde woman in black leggings having a passionate argument on the phone about a suspicious rash - “I want to die”. Be careful what you wish for (and who you sleep with).
10:39
Two bros running ridiculously close to each other, their hips move synchronically, their perfectly conditioned hair bounces rhythmically. They obviously love each other - they just don’t know it yet.
10:41
The leopard print dog walks past me again. I look at him. He looks at me. He barks twice.
10:46
My duck friend Patricia is in a mood. Consuelo the Swan is being a dick (no surprise there). I know this is a story about people watching - ducks are not people. They’re better.
10:50
Man with man bun and faux leather trench coat and a New Yorker tote bag. He doesn’t know it – but today is trash collection day. You in danger, girl.
10:55
Woman wearing a fancy coat and high heels on a Thursday morning. I look at her, she looks at me. It’s Versace, not Versachee.
10:57
Woman wearing an 'Is It Friday Yet' t-shirt. Omg Linda, you cray cray.
11:01
Park employee in yellow vest. We make eye contact - a blank stare, a stark warning. I’m not here to exercise – and she knows it. She’s drunk with power. I think about my history of conflict with figures of authority. I stand up and leave.
Victoria Park, Thursday, 25 February

March 06, 2021
Welcome to Valerio's Press Review, the series in which I read a magazine or newspaper (okay... look at the pictures) and write mean things about the people in them. It's fun! 1) A revitalising afternoon of clam-digging on Southend beach? A day of snorkelling by the port of Dover? Make sure you pack Rolex’s newest submarine watch! You don’t want the fish to think you’re poor.  2) Dolce & Gabbana’s latest collection. The question on everybody’s lips is: do you really want to look like your rich friend’s beach house bathroom? The answer is, and always will be, yes. 3) Sam Claflin for Barbour. A GQ insider told me that his puzzled expression is due to the fact that, for the whole duration of the photo shoot, Sam couldn’t help but wonder if he’d remembered to feed the cat before he left his flat. Models... they’re just like us <3 4) GQ’s Staycation must-have items. If you were stranded on a desert island and you could only bring one item with you, what would it be? Duh! A £32
3 comments
Read more

The Love Series: Dressed For The Occasion

October 04, 2019
I think we’ve all been there before. You’ve finally managed to bag a hot date. You approach the whole operation with scientific precision and military discipline. You pick the best time for both of you, scour Yelp for the cheapest restaurants with a minimum hygiene rating of 4/5 and proceed to send your location to the group chat so your friends know where to find your lifeless body in case your date turns out to be the millennial Ted Bundy/Aileen Wuornos. Everything is ready, planned to the last detail. But then the big day comes and, oh shit… you have nothing to wear. You lean into your closet and ouch, all you can see is a blurry cluster of old, faded, Salvation Army-ish items that all of your friends will promptly veto and report to the authorities (wearing them in public would indeed qualify as a lewd act) the moment they receive your panicked snaps. It’s like Primark’s reduced section on steroids. A felt jacket? Too shabby. A funky silk shirt with oriental patterns? too
3 comments
Read more

February 13, 2016
This was meant to happen, sooner or later. I bet you all saw this coming. I mean, everyone who knows me has heard me complaining about any form of public transport at least once. And after spending one year in the busiest city in the world, where the tube is basically a national institution just like the Queen and cucumbers in sandwiches, I am ready to speak out. Even though I promised myself that I wasn't going to merely look through all the legendary stereotypes about public means of transport, the circumstances force me to mention at least some of them, clearly enriched with the inedited shades of absurdity that have been coloring my life since its very beginning. I'd start by describing you one of the most uncomfortable situation that my daily life offers me. No, wait, I'll reword this.  I am not talking of one particular episode. I mean, that's it: my life is an uncomfortable situation. But let's start from the beginning. I wake u
14 comments
Read more