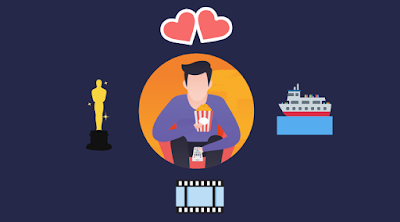 I spent most of my existence wishing that life were like a movie. As a child, I would sit on a fluffy rug at my grandma’s house, glued to the screen of a vintage television set for countless hours. I stood way too close to the telly, mouth open, wishing that that shiny box would one day turn into my own rabbit hole, and that I would slip into a perfectly edited world where remarkable stories awaited me.

When I realised I had grown too big to fit into my TV, I had to come up with another plan. I decided that I would live the most extraordinary life, that the plot of my existence would be so intricate and wonderfully told that it wouldn’t fit on the back of a DVD case. It was the beginning of a Hollywood-induced delirium that continues to this day.

I woke up one day, at age 23, to realise that I had made it… kind of. All the time spent watching Nora Ephron movies and memorising dialogues from 90s chick-flicks finally paid off. Sure, my life was far from perfect. But I had my moments. I looked back at some of the things that happened to me in the past six months and I just couldn’t ignore the fact that my life, especially my love life, had finally acquired an undeniable cinematic quality. Sometimes excessively so.

Clearly, none of these dramatic moments has led to the happy ending I have come to expect. Far from it. But sooner or later, it’ll come. In the movies, it always does. So I chose to live my life like a film. I accepted its unpredictability, the plot twists and the many bumps in the road. I only had one condition: I would always be the main character. That’s something I was never willing to compromise on, until recently.

Not too long ago, I met someone. A brief encounter that held great promise. The person sitting in front of me on a floating boat/bar on the Thames had real potential to become the LRI, the lead’s romantic interest. For about two hours, the writers’ room agreed. Sitting at the table across the LRI, I couldn’t help but feel as if that character had been written just for me. I stayed grounded, but hopeful nevertheless.

Of course, things didn’t go as planned. Plot twist, you wonder? Worse, much worse. I realised that the movie I was living wasn’t really my movie after all: in a dramatic turn of events, the LRI chose to confess their feelings for someone else, and that us being together that night was just an experiment to test the intensity of such sentiments towards what turned out to be the actual LRI in a movie that wasn’t mine. God, whoever thought of that deserves an Academy Award - and a massive slap on the face.

I shrugged. Another funny two-line anecdote for my column, I thought. Thank you next. But I quickly realised that there was more to it. Maybe this wasn’t just a filler scene that would be cut out in the editing room. Maybe I had served a higher purpose. So I changed the script for the night. My understanding of it is that the experiment, in some strange way, worked. If the (former) LRI’s feelings towards the other person remained unchanged even after meeting someone as amazing as me (not my words), then it meant they now had a legitimate reason to follow their heart and live their own movie.

But accepting this narrative would mean admitting that, for the first time, I was not the main character.  I was a cameo, at best, some minor figure who enabled the flow of the story between the main characters. I had to come to terms with the fact that I would be barely acknowledged in the credits as “Random Guy #3”. I wouldn’t even be mentioned on the Wikipedia page.

I watched in horror and disbelief as the plot unfolded. Being the bigger person is never fun, but I did it anyway, because at the end of the day… I am a sucker for a happy ending, even if it doesn’t involve me.

Back to real life, I’ll admit that I was at least a little bit disappointed. Sure, I wasn’t hurt or anything, but I am a notoriously over-sentimental being, and I’d be lying if I told you that such things don’t affect me. They do. Every date that I’ve been on, no matter how insignificant, has left an impact in some way or another.

But this was different. Sitting at the table with someone and having an honest conversation about the mysteries of life and love requires an amount of openness that cannot be achieved without vulnerability. And I was, indeed, vulnerable – hence the disappointment. But whose fault was it? Nobody’s. I am often a victim of my own emotional illiteracy when it comes to love. This time around, I became a victim of someone else’s. And I don’t hold it against anyone. We were just two wandering souls coming from freakishly similar sets of circumstances after all, and in the end I can’t help but respect someone who would do this for a shot at true love.

In the meantime, my disappointment is minor collateral damage. But such is life, and such are movies. Sure, I thought I would have made a great main character, I was confident that I could have made LRI very happy, if things had been different. But who am I to arbitrarily decide that I am the best person for someone else? I can’t. And I would never even dream of standing in the way of someone’s very own Casablanca (also, I’m too busy living my own Titanic, thank you very much).

So, with uncharacteristic grace and dignity, I took a step back. After so many years, I swallowed my pride and decided to go back to sit on that fluffy rug, standing too close to the TV, waiting for the happy ending the real protagonist of the movie deserves.

As for me, a happy ending wouldn’t really be that happy if it didn’t involve some narrative tension and a dramatic plot twist. It’s never been easy. It’s not meant to. I am rooting for the main characters. I want them to do well. But remember, folks, I’ve seen enough movies to know that it ain’t over until it’s over. I’ll let the story run its course, I won’t interfere.

But just picture this for a second. Imagine if after all that I’ve just said, even after writing this article, the former potential LRI will wake up one day and realise that I was their LRI all along. Who knows, maybe one day this will turn out to be my movie after all. Maybe it won’t.

Sure as hell, I ain’t gonna stand here waiting for someone to change their mind. No one wants to see a gender-swapped version of “Cinderella – The Movie” set in modern-day London. That’s one reboot that nobody asked for. I’ll keep on doing my thing and collecting stories, letting myself feel all the feelings and then writing about it.

But remember, in Sleepless in Seattle, Tom Hanks rushed to the top of the Empire State Building and confessed his love for Meg Ryan. Rachel from Friends got off the plane, in the end (not a movie, I know). In Say Anything,  John Cusack showed up at Diane Court’s place holding a boom box over his head to win her back. Couldn’t something like that happen to me, for once? I know what you’re thinking… that stuff only happens in the movies. Well, now that’s a movie I’d really like to watch.