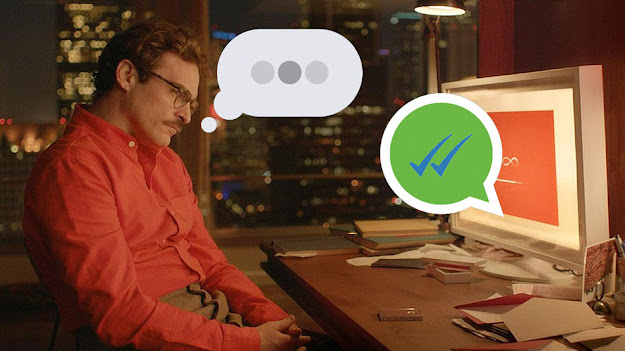 In the short and complicated history of digital dating, it has often been the case that people who seem brilliant on WhatsApp turn out to be lacklustre in real life. But I would like to divert your attention to the other, more fascinating silent minority: potential suitors who are fun and intriguing in person but disappointingly “meh” over text.

The colonisation of our lives by social media and instant messaging apps means that, when you start dating someone, you’re effectively getting to know two people at the same time. Smartphones have determined a  fission of our egos along two different dimensions, online and offline, with predictably nuclear consequences.

The problem starts when the two personalities within an individual not only don’t overlap, but are also in direct conflict with each other. People’s romantic conduct is articulated through different layers. Their performance is the result of countless variables that have to be factored in before you finalise your decision on whether you want to continue seeing them or not.

One thing to consider is that it’s clearly easier to get excited in person than over text. When you meet in real life, the person sitting in front of you may be under the impression they like you because visual stimuli trigger sentiments of lust and physical attraction. The recipient of this Lust then interprets this as a sign of a meaningful connection when in reality they are not being appreciated but… sexualised.

However, it has become too common to make snap judgements about people based on a brief text exchange. We’ve come to believe that our past experiences, however varied, can safely help us identify patterns of behaviour which we can apply to the next person. But it really isn’t that straightforward.

Some of it comes down to strategy. Even silences can be part of a carefully calculated plan. Is the person at the other end of the screen a quiet and mysterious type… or just a plain Joe/Jane with not much to say? Is their speechlessness part of an intricate strategy of seduction or, more simply, a sign that they’re just not that into you?

On the subject of strategic texting, my friend Mirianna managed to convey her skepticism in one short sentence that unfortunately rings true for many: “Men in text lie a whole lot. Like they tell you what you want to hear. What you like. They’re all Libras.” (I’m a Libra so cheers for that)

My friend and serial dater Silvia, on the other hand, describes her disillusionment with the unavoidable dualism that comes with the mine-filled territory of online dating : “I wouldn't wanna go out with someone that is amazing and witty and exciting in person and is not able to kind of do the same over message. It would be almost as if I was dating two different people.”

I think we need to go about this with scientific rigor. Let’s put  the anecdotal evidence on the side for a second, and let’s focus on the science: studies show that similarities between partners in text messaging and frequency of initiating texts were associated with greater relationship outcome. Which is no surprise. Obviously the mechanical act of typing a text in itself doesn’t tell us much. It comes down to shared core values, or, as another piece of research has shown, to similar level of emotional intelligence between a couple (which I assume is reflected into their texting etiquette and communication styles).

However, we seem to forget that what is meant to be a tool to facilitate communication can also be a liability.  A survey of 100 single women conducted a few years ago shows that, among the reasons women flake on the first date, 60% of it has to do with men’s “desperate and needy” behaviour over text, followed by dirty language and messages which reveal jealous traits. 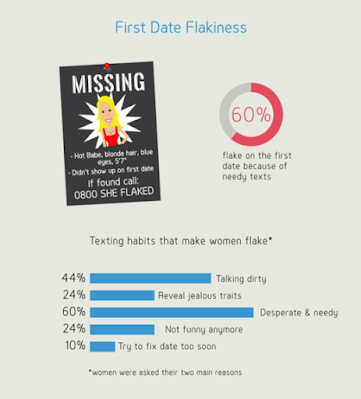 Especially at the beginning of the dating process, people get into their own heads. The pressure to appear brilliant and humble, flirty but polite at all times can throw you into a spiral of self-doubt fuelled by the awareness that it’s a lot harder to forgive mistakes if there’s a permanent, written record of them. A silly slip of the tongue is easier to forgive than a slip of the finger. So some people would rather say nothing at all.

It’s no surprise that some of us are very wary when it comes to texting given the implications that it has on our dating lives. Finding the balance is almost impossible: how do you go about texting just enough to seem interested but not to the point where you come off as desperate? I have made some pretty terrible gaffes over texts or on first dates that would probably have scared most people away. Like, sharing every gruesome detail of my circumcision story (why am I like this). Most people would be like ok, weirdo, bye. And yet… I ended up building successful relationships despite my all-to-common faux paus and my tendency to engage in dramatic retellings of personal anecdotes on body mutilation. 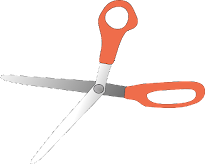 One thing to consider is that all media have converged into one single device, your smartphone. News, entertainment, horoscope apps. The potential for distraction is endless. But confirmation bias is your enemy so please don’t use what I’ve just said to justify the fact that your crush hasn’t replied to your text in four days. Humans are simple creatures - when you’re into someone, a BBC push notification is not enough to take the attention away from your object of affection. Or is this just me? Am I forcing my way of interpreting dating etiquette on other people? Where IS the lie?

Some of you my remember an article from last year, “You Can Type But You Can’t Touch”, in which I wrote about my friend Francesca’s Microsoft Outlook affair with an older coworker. Their “affair” was made up of racy texts and Instagram stories but, much to Francesca’s dismay, it was never consummated. “It’s the endless teasing of a sexless generation,” I lamented, “grown men promising sex and delivering pathetic excuses.”
But what happens when they’ll touch but they won’t type? Is it a red flag? If there’s anything this pandemic has taught us is that physical proximity is not something we can take for granted and someone’s ability to sustain a periodically platonic connection is essential, now more than ever. But even in peaceful times, our love lives unfold through the prism of online connections, so is it really wise to start a conversation with someone who is illiterate in the language of digital love?

I’ll leave you with a quote from my friend Angela, a literal angel who seems to float above the squabbles and hassles of modern romance. She took to the group chat for the mic-drop du jour, encouraging her friends to stop obsessing over emojis and double ticks: “Hear me out, guys. Technology could disappear tomorrow, and all we would be left with is each other.”