The Day I Quit Playing Games 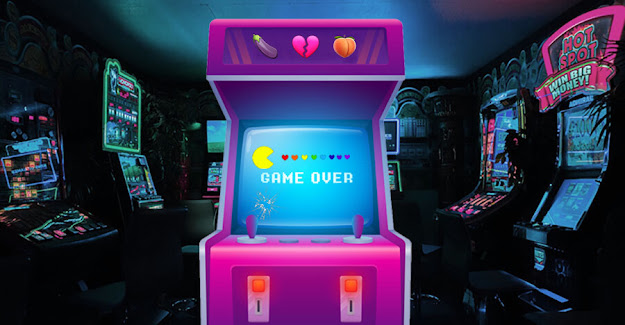 Love is a losing game, Amy sang. I don’t know if loss is the inevitable outcome, even though that’s where all the signs seem to point. But she was right about something: it is a game. And a bloody difficult one at that.

I am not a player. I don’t even like video games. I haven’t played one in years. But I still remember what it felt like when, sitting on the floor of my small green bedroom, I turned on my PlayStation 1 and listened to the climax of the console engine as it warmed up. I would then glance at a picture of the Virgin Mary on the wall and gave her a complicit nod: “Come on, Mary, we’re on the same team here. Help a brother out". I was ready.

The games started: Resident Evil, Tomb Raider, Crash Bandicoot, Silent Hill. I squinted my eyes at the screen so hard I thought I would break it, Matilda style. My hands were tense and sweaty, clutching a controller that burned like lava in my hands. Each session felt like a matter of life and death. And in my small world, it really was.

That’s why I quit. It was too much stress for an over-excitable child with a hyperactive imagination. I so badly wanted to get to the next level that I never took the time to actually enjoy the game. I couldn’t have fun with it. The end didn’t justify the excruciating means.

What I’m really trying to say here is... in PlayStation as in life, I don’t do games. Dating can and should be fun and playful – I’ll give you that. Some people just love the rush and the chase and the intricate courtship strategies that make the forbidden fruit taste even sweeter once you get it. But the dating game is rigged, the rules exhausting, you don’t get extra lives and the players always turn out to be sore losers.

It takes years to understand the damn rules. At some point, usually in your late twenties, you finally get a sense of the dos and don'ts. Lots of experience and a certain amount of Psychology Today articles usually get you there. People flick through the instruction manual and suddenly they’re all caught up. Dating becomes a draining game of Monopoly where the ultimate goal is emotional manipulation and instead of cashing in taxes and fines you collect heartbreak and STIs.

You know what I’m talking about. Tactical texting. Make them wait, but don’t leave them hanging too long. Never be the first to initiate a conversation. Don’t have sex too soon. Dress well but don’t try too hard. Be flirty - but don’t be a pig. Offer to pay - but don’t patronise. Use the blush emoji but NEVER the kissy one. And Jesus Christ by the time you’re done overthinking all this shit you just want to go to the corner shop, where Amir will look at you, shake his head, and hand you a bottle of Jack Daniels and a pint of Ben and Jerry’s before you’ve even said anything. Amir knows what’s up.

There’s just so much to consider, you know. So much to think about. You turn into one of those desperate salespeople with horrible ties who show up at your door desperately trying to convince you to buy a product even they don’t believe in. The sales pitch usually goes like this: “Love me pleaseeeeeeeee.”

I can play the game. I can be very good at the game. But at what price? Am I under the impression that showing this effortless and chill version of myself is going to make me more lovable (or tolerable) to the eyes of others? That’s a lie. I ain’t effortless and, most importantly I ain’t chill. My brain is a chaotic, high-voltage mass of nerves. It absorbs and fries information and it keeps it cooking until it’s overdone. I feel things. I feel them long and hard. I haemorrhage words and ideas and concepts and graceless displays of joy and sadness and affection. I need a truckload of healing crystals and a field of white sage to deal with this shit, but that’s who I am. I don’t need to lure anyone into my honey trap just for them to realise that I have misled them and deceived them. I keep it real.

And yes. Refusing to play the game makes you vulnerable. Being too direct and upfront can be scary and off-putting. The heart you wear on your sleeve makes you an easy target. But for Pete’s sake, you want to be with someone who can take it. Weakness and ineptitude are even less desirable qualities than an excess of honesty. If you can’t handle this, then I don’t know what to do with you. You’re better off finding yourself another bozo from Tinder who likes Netflix and long walks on the beach.

So one spring day, back in my little green room, I unplugged my Playstation, looked out the window and thought I’d rather be out there, playing ball with my friends. Something similar has happened to me recently. The dating game became exhausting - and there was too much to lose. I messaged the WhatsApp group and there they were, my friends, laying on the grass, hugging each other as they sipped on warm prosecco. I recalled the picture of the Virgin Mary and this time her expression seemed to say: “nah, you’re on your own, boy.” But I wasn’t. My friends were still there, right next to me. The phone kept ringing as people slid in and out of my DMs and my life. But I was done playing. Steinbeck said it first: “The main thing is not to hurry. Nothing good gets away.”