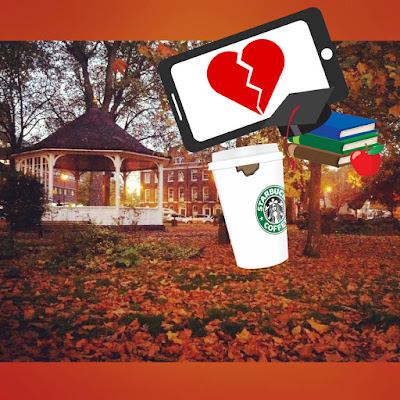 I’m sitting on the big sofa in the main entrance to City University, facing Northampton Square, and I have just completed a two-hour long people-watching session. It’s one of my favourite activities: just watching people come and go.

Weird, I know. But I’m easily bored and I find the act of observing random people doing random things extremely entertaining. I try to find meaning in their idiosyncrasies and interpret the motives behind their behaviour. Most of the time, I just find solace in the pointlessness of their actions when they think nobody is watching them.

It doesn’t matter if it’s a single person, couples, big groups… they are all part of a story-line. I also give them fictional names, mostly for comedic effects.

Yes Linda, I know you’re reading this. Remember that time you picked your nose in the cafeteria? I was there. I saw everything. I know what you did last summer.

I guess it all goes back to my reckless curiosity and the inquisitive nature of my studies. As a journalist, you’re taught that every person has a story.  And if there’s a story, then I want to know it.

Anyways, since most people are usually not willing to tell their story to a stranger who spends his time looking at people and binge-eating Maltesers, my mind-reading powers and stalking abilities are all I’m left with.

So let’s talk about some of the findings resulting from this long and intense ethnographic observation.
It’s almost Christmas and love is all around. Some of you are already waiting under the mistletoe. Unfortunately, I see no love in the corridors of this university. What I see, though, is a lot of anxious running, occasional crying and an inappropriately high number of people wearing sandals with socks.

Like seriously, Willy, set those socks on fire and ask your girlfriend to buy you a proper pair of shoes this Christmas. Barf.

As I was saying, I see many things in this university but love ain’t one of them. No trace whatsoever of fulfilled, consumed, cinematic love. I just see people jumping from screen to screen, completely uninvolved in the human potential that surrounds them.

Wait a minute. That is not to say that I ignore the existence of those libidinous couples who make out on every single couch that this university as the offer. Oh, I see you. And for God’s sake, Rudolph and Mary, this is the Common Room not a Lebanese brothel. Get a room.

But let’s cut to the chase. The reason behind this unsolicited rant is the sudden realisation that DATING APPS HAVE RUINED EVERYTHING for us.

I know what you’re thinking: ‘’How did you manage to make this about dating apps?”

I’m talking to you, Georgina: I see you chasing Jimmy all over campus, constantly lusting after him, waiting for the day he notices you. Now, first thing first, Jimmy spends his days at City Sport (which automatically makes him not so bright) so you might want to consider getting a gym membership to maximise the chance of ‘casually’ bumping into each other (for more info sign up for my new module, Stalking 101).

But the real problem is… I know for a fact that Georgina has no problems sending nudes to strangers on Tinder. So how come she can’t bring herself to speak to not-so-bright-Jimmy? I mean, that’s a completely messed up concept of shyness, don’t you agree?

But let’s get to the bottom of the issue (I stopped talking about nudes in the last paragraph, you freaks). The problem began the day that talking to the person you like when you’re queuing in the Costa downstairs has become ‘creepy’, while sending and receiving dick picks is cool and normal.

Seriously, folks, we have a problem. Every day, I see people happily swimming in a pond of apathy and indifference. They struggle to preserve what is left of the normalcy of human relationships.

Regular interactions between strangers are made more complicated by the lack of barriers, which leaves people feeling exposed and vulnerable. You see the irony there?

Having that screen between you and the other person allows you to control your image, edit your words and carefully polish every aspect of your virtual persona. And I know I sound like your 50-year-old mother just arbitrarily complaining about how technology has ruined everything but, believe me, the struggle is real.

Now, I don’t want to use this platform for some distorted form of personal vendetta (though I know you love the drama) but let me tell you a story.

Some time ago, I took the courage to talk to my crush on campus and we had a short and very unsatisfying conversation. I did not discuss philosophy or global warning, I might have mentioned the weather, at best.

I knew it was a clumsy attempt, but I thought I was doing something cute. What I got in return, though, was a look full of disdain that seemed to say ‘’Oh God back up you creep or I’m going to get a restraining order’’. It felt humiliating: I was made to feel like I had done something distasteful when I was just trying to be nice and polite.

Well, first off all: piss off already.
Secondly, when are we going to stop normalizing the abnormal and come back to the real world?

Now, you might want to refrain from taking advice on dating from me, considering that my romantic life has been nothing but a series of unfortunate events. But trust me when I say that there is nothing creepy or distasteful in wanting to talk to each other.

Saying ‘hey’ does not necessarily translate into ‘I want to have your babies’ or ‘I wanna know the color of your undies’. Sometimes ‘hey’ just means ‘hey’. That’s how conversations, friendships and even romance start in real life. Seeing someone’s genitalia before even talking to them? Now that’s real creepy.

So yes, let the spirit of this jolly holiday inspire you and keep on following your crush around until they join you under the mistletoe. And talk to each other, for crying out loud! Just remember to avoid weather talk, possibly. We all know how that worked out for me!