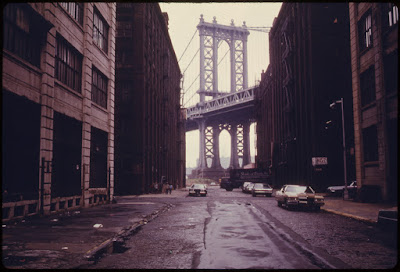 I was in the same bar as always, down in Kew Gardens. On the other side of the room there was a big TV, on silent, and three women seemed to be having a lively discussion while the TV showed pictures of the young black-haired intern who  had an affair with the president.

From the speakers above my head I could clearly hear the unmistakable hoarse voice of Macy Gray.

I finished my Manhattan, and continued, while looking her straight in the eyes.

‘’It’s not always what it seems, you know. I can’t really get rid of this feeling. You wouldn’t expect me to feel out of place after all this time in the big city. I mean… it’s 1999, we are at the dawn of the new millennium and I get to live this historic moment in the most amazing place on earth, New York City.

But you know… things have changed. They are not like they used to be. It’s true, New York is big enough for me to hide and claim the anonymity I wanted so badly when I was in a small village back in Canada. When everyone knew everyone and everything. But this is too much. In Canada I was someone. In that small town I was not the person I wanted to be but at least I was someone, a name and a face and a soul.

Here I’m Mr. Nobody. Just one more sad face in the tube. Invisible, depersonalized, apparently soulless. How can you cope with that constant feeling of alienation? I can’t even call it loneliness: I am very rarely alone. I share my flat with two Norwegian lesbians and a Jamaican songwriter. And they’re always there, with their imposing presence and the sound of their voices and the smell of their food. All in a small stuffy flat in Queens where doors don’t have locks and the reasonable expectation of privacy is not reasonable at all. There’ll always be someone breaking into my room, uninvited, asking me for money or salt or comfort.

I spend my day surrounded by all sort of people: on the train, at work, at the bar around the corner. It’s an omnipresent and noisy crowd, repetitive soundtrack of my endless grey days. And you know that they’re there, physically with you, but in fact you’re on your own. And being on your own is nice when you want to. That’s what I like about New York: no one’s gonna bother you if you don’t want them to.

Best case scenario I am in the bar and someone approaches me and starts asking questions and for a second I actually believe they care or that they try to care but at the end they are just trying to hit on me or sell me that new drug rich Californian kids get high on. Or maybe they’re drunk, desperate people impatient to pour their emotional mess all over me. As if I didn’t have enough of that already.

Yet I have plenty of good people in my life, valuable people… some here, more in Canada. I really don’t need to beg for company. And I wouldn’t do it even if actually needed to. I find it depressing and humiliating. When I want someone all I need to do is make a couple of phone calls. And here they are, at the other end of the line, reminding me of how easy I make it for them to love me.”

I may appear to be free, but I am just a prisoner of your love. The music kept playing.

“But it’s all different here. You grow up with the myth of the big city, fostered by the radio and television and the weekly magazines that describe the rise of new urban sub-cultures. In your mind you've built the idea of the city as a sort of unattainable temple, almost sacred, and you make it your mission to go there and conquer it. I had such great expectations, I still do: big city, big people, big feelings. Many things going on - rage, fear, despair, love, laughter, pleasure, shame. I can’t feel any of that now.

At the end of the day I am still sitting at the bar, alone or with strangers like you. I usually listen to that Italian bartender, the one down there, who never shuts up and tells me about his dream to become a screenwriter, while making the next drink before I even ask.

I look around, smile at the next girl, flirt with her for a bit. I drown in the comfort of strangers just to find out that at the end I’m a bit emptier than before. And I fill the ‘nothing’ with the alcohol my trusted Italian bartender gives me so generously while talking about that great idea they stole from him when he worked in that radio station in Milan.

And you turn around and you see, you feel hundreds of similar stories: broken promises, abandoned dreams, anecdotes of disappointment and betrayal. And you take it all on yourself, and while you’re sorry for them you wonder when it’s gonna happen to you. You start fearing the moment you become one of them, a defeated soul wondering without a direction along the streets of a city full of sin and desire.''

I paused for a second. The song was over.

''I’m sorry, I didn’t mean to bore you. I could go on for hours but tell me more about you. What is it you were saying about your new job? You said you just moved into a new flat, right? Tell me more.’’

She said, smiling, and then continued...

'' It’s not that interesting after all. I live around the corner. You wanna come home with me after this drink?’’