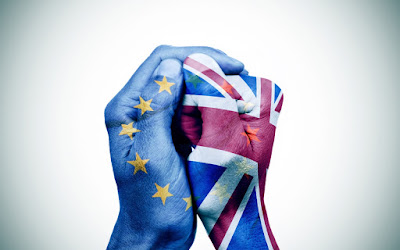 This morning I woke up with the sad news that everyone’s probably heard by now: Brexit has actually happened. I was shocked. I really didn’t see it coming. I mean, clearly I’ve been here in London in the past few months and I’ve witnessed the tireless campaigns of both sides and I knew perfectly what could happen. It’s just that, very naively, I never believed it would actually happen.

You know, we are all used to those far-right loonies so keen on bringing the world back to the middle ages who periodically come up with the brilliant idea to destroy the achievements of modern democracies or re-penalize abortion and make divorce and homosexuality illegal again. This just sounded like it.

The thing is… you know that they’re there but you never really listen to them because you know, you might be skeptical when it comes to politics but you still have faith in the people, and you assume the people will never let that stuff happen.

And that’s where today’s burning disappointment really comes from: I know I’m not supposed to but I’m living it as a form of betrayal or, worse, as a realization of all the fears and suspects that I’ve had for the past couple of years and that I’ve tried to summarize under the simplistic definition of paranoia.

Although it directly affected me, I kept a dignified silence all this time about this referendum because it was not my decision and I didn’t feel like I actually had a say.

And now I don’t want to give you a lame speech about politics. I don’t want and I can’t because, at this stage, I don’t even feel like I have the knowledge and the skills to do it. This is just the way  I see it and feel it so take it as it is: an emotional outburst. After all, this whole Brexit thing is not only about politics or economics or any other abstract reason most people really don’t understand.

I’ve done my fair share of research and I have read a lot about global trade and sovereignty and European Law and I’ve been able to observe that these things, while important, don’t really touch people’s lives in a visible way, they don’t directly affect them.

But there is one specific issue, skillfully exploited and demonized by the leave campaign, that has leveraged on people’s hidden nationalistic feelings and has led to this result: immigration.

And I don't know about the rest of the country, but in cities like London the effect of immigration is quite visible. Just try taking the tube in London and you’ll realize how hard it is to find two people of the same color in the same carriage.

That’s what London is about. It’s multiculturalism and diversity that makes this city great, a sort of small replica of the world, a microcosm.

Now, there’s been a lot of speculation about immigration and its magnitude and the effects on Britain’s economy. And it’s a fact by now that EU migrants don’t come here to merely claim benefits but give a huge contribution to the national economy through hard work and commitment.

Yet, people tend to give the word migrant a negative meaning: a migrant is usually seen as someone who goes somewhere to steal jobs and commit crimes and ‘’contaminates’’ the purity of a country.

My friend, needless to remind you that this is NOT, in any way, the case. Yet I’ve heard this bullshit countless times.

So what’s the point?

Since I came here, from the very first day. I’ve always had what I thought to be the wrong impression to not be very welcome. Nothing too explicit: it’s a very subtle inference, it takes time and patience to catch it. Yet I love this country and the people who live in it.

I chose Britain as my second home, and I didn’t do it out of insanity or desperation. My country is quite nice, my friends. And Europe is big. I had a choice, I still have one.

But I chose Britain as the place where to start building my future. I made plans, lots of them. And I’ve based them on my condition of European citizen in a European country.

I didn’t come here to ‘’steal’’, but to absorb the best of this country and give it MY best in return.

And I’m grateful to it, ‘cause I got a lot of good opportunities and things are going quite well but yet I've always felt there was something, something between me and typical British mentality that I could not completely understand. A form of disconnection.

But where did that come from? Was it me?
It’s not like I haven’t tried, I’ve made many desperate attempts to elasticize my cultural intelligence and get to see things from their point of view and understand what unites us and what divides us. Many times I’ve forced myself to laugh at sarcastic jokes that hid an implicit claim of superiority or I've justified disrespectful behavior with ridiculous excuses.

But Brexit was an unwanted confirmation of my paranoia.  Maybe it was always real after all.

But this morning I woke up and as I met all those potential leave voters I even struggled to look them in the eyes.

And I guess this is the immediate effect of this referendum, wisely predicted by some: to widen the distance, expand the gaps, tear us apart.

Yet I’m here now and I don’t know what I’ll do. I had plans but I have to cancel them... because things may go well or may not. It's a jump in the dark. I might be allowed to work here freely after taking my degree, or I may be sent straight back where I come from and be forced to rethink all the plans I made for my future. I just wish I had known this earlier.

Because at some point I might have to leave, yes... but what scares me the most is the fact that, maybe, I no longer want to stay.