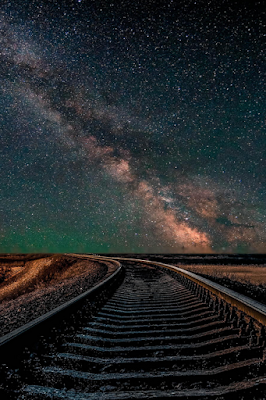 Chad and Iris were sitting on the tracks of the abandoned railroad. The rails, imbued with warmth, told the stories of the midday sun. A sun that Chad now was struggling to see, as it was hidden behind the stone mountains, with no trees nor plants, drawn on an indigo sky prematurely filled with pale, shy stars.

She stared at him, trying to unravel its mystery. A lock of hair covering her lips, red as cherries resting on the snow.

He kept looking in the opposite direction, his eyes firmly planted on the wheat fields, endless golden blankets that in summer transformed the barren grasslands of Missouri in a Van-Gogh painting.

He turned towards her, touching her face.

'' A year '' - he said - '' A year. How many things can happen in one single year?
It 'a trivial question, I know.
But think about it for a moment, Iris.
One year. 365 days. A time segment, an astronomical measure, a civil convention.
It doesn’t matter.
Beyond the fixed patterns and predetermined units, what is a year?
I don’t know. I can’t explain it.
Perhaps it is simpler than it appears.
Time is relative. Each clock marks a different time.
Some years just go by, slow and unnoticed.
Others, instead, that between start and end compress infinite ages.
How can so many events occur in one single year? ''

He said, right before swallowing down another sip of liquor.

'' Mine is a strange age.
Twenty years old. What are twenty years?
Too much and too little. Too soon and too late.
And for God’s sake, I'm sure this will sound strange to you: but I don’t want to grow up. I never have.
I’ve learned a lot this year.
A job, a language, a thousand songs.
I met thousands of people this year.
Good or bad, in the worst case both at the same time.
I have seen, done, experienced and thought a lot of things this year.
But yet, I fail to understand how this game works. And that doesn’t mean I haven’t tried. That doesn’t mean I’m giving up.
But sometimes I am just so tired. I didn’t give up to the passing of time: I went against him, reaching it, sometimes catching it. But the more I run the more I collapse under the violent impotence of those who run on the path of time and know that it’s a way that can’t be crossed in reverse.

Sometimes I wish I could go back to when I didn’t have to fight to find a way to escape from the castle of glass that someone else has built for me.

In a small big world where I didn’t need shelter, for there was no need to disappear.
Where I didn't need sleeping pills or medicines for migraines.
Where coffee is drunk for pleasure and not for necessity.
When I was too young for wine.
Back to the time when I had beauty, but ignored it.
Admiration, but I didn’t look for it.
Love, but I didn’t need it.
And was it worth it, in the end?
Opposing the time and then walking towards it.
Running towards my failures, confronting them, sometimes overcoming them.
And at the end of the day, what did I gain?
I broke my spell of invincibility. I swallowed a poisonous, self-inflicted awareness. I embraced my vulnerability, in an attempt to choke it.

What was the point… in experiencing the cold, humiliation, rejection and disappointment?
Not to make me stronger, but to widen the gaps, to dig abysses, to trigger bombs ready to explode under the feet of the people coming in and out of my life ''.

She watched, astonished. The glass firmly kept between her thin fingers.

''There's something inside of me '' - he went on - ''an indomitable energy that ignites and extinguishes continuously, perhaps taking  different forms, sometimes opposed to each other: fear, hope, loneliness and euphoria.
I write stories. That’s what I do. That’s who I am.
But not now. Not with me. There is no ink in this pen. No blank spaces to fill in this text that I struggle to comprehend.
There is no control, prevision or plan that works.
I am the victim of a greater force, a force that comes from a soul that has the depth of a universe. A place where it’s always night, where the black holes attract you and suck you in their annihilating vortex, where the stars shine and glow and end up blinding you and burning you: a beautiful light, then the darkness. A trail of black smoke, dark and impenetrable, to draw the silhouette of the man I want to be and I am not.
I'd like to celebrate this anniversary with a wish to myself, to the person I try to be: a man who is king and master of his universe, one who controls the movement of stars and dominates gravity. The king of a universe where a year is enough to build the grounds of an invincible happiness, without space and without time.
But I can’t.
Because I missed the right time and the right place.


Because maybe it is not the way it’s meant to be. And it never will be''.