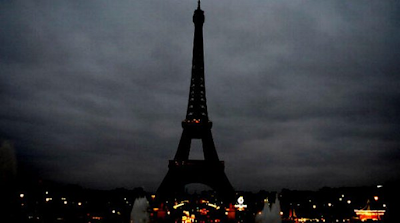 You know, now I understand those who say that hate only generates hate. I didn’t think it was possible. It’s a legend, a common saying, a fairytale - I thought. It could never happen to me – I said. I have my idea of Hate; a precise, real idea and therefore I did not think that I was immune to it. I am a man, like everyone else, not a superhero. But suddenly all the ‘’improbabilities’’ have been cancelled after the overlap of those remote factors that, when put together, made me feel like I’m feeling now.

And what I am feeling now is something new: not unexpected, rather different than how I had imagined it. It’s bigger than indignation, fear, disappointment.
Rage is a feeling that I thought I knew: an unrestrainable impetus, yes, but I always thought I was able to handle it.  It had always been a remote hypothesis, a human tendency that had never found fertile ground in me.

But this time I can’t. No, it’s too big. I can’t describe it. I can’t quantify nor qualify it.

I do not hate. I don’t think I am biologically able to hate. Hate is blind, extremely irrational: inhuman as a product of typically human inclinations. It is perverse and yet harmoniously natural.
But now I am confused, this boisterous rage that I am feeling now is the closest feeling to hate that I would ever be able to feel.

This ‘’hatred’’, if we can call it that,, is an anomalous condition: it does not exist, or at least it does not exist on its own. It is rather a consequence of different stimuli that dramatically converge into an impulse that in itself is a product of dissimiliar impulses: powerlessness, dismay, anger. It’s something that I can’t explain

Inexplicable, yes, but yet rationally justifiable.

Paris, today, is not only Paris… it’s something bigger. It’s a symbol, an emblem. Paris is Europe, the West. Paris is you and me. Paris is our home. It’s us.

Paris is my home: and I cannot show sympathy. I can’t strain my feelings under the filter of a rationality that in this moment might be quite inappropriate.

We need to be careful, for this kind of talks run the easy risk of degenerating into hypocrisy. Every religion, or culture, if we can call it that, has been responsible of horrible actions. Mine as theirs. In the past as today.

What’s the point of circumscribing Evil in a given place or time when it is an unchangeable constant affecting not a man or a group of men, but mankind in general.

I do not consider myself able to study or comment Evil. Yet I can, and I must, say something about this specific evil that we are facing HERE and NOW.

It is happening now, under our eyes. It is evident and undeniable. It is so obvious that it does not require sophisticated exercises of thought nor profound political analyses.

Let’s open our eyes: this is bigger than the fight between Islam and the West. Something that stands above West and East and escapes any spatial entity: it is the banal, ancient conflict between Good and Evil.

And who am I to offer solutions or give advice? For this reason, once again, I don’t entrust what I know, but what I feel. And I feel that, beyond the abstract speeches and the smoky speculations, we must stand up and fight against the enemy. Therefore there’s not time for infertile debates. We must do something.

We must focus and flush out the real enemies, hidden inside the false Enemy, mistakenly overlapped to a race or religion, that the superficial and misleading arguments of many led us to identify as such, therefore depersonalizing it.

All these speculations that have little to do with reality, pointing the finger at someone and labelling it as an enemy just because it is convenient to them and a few others, are doing even more harm than bombs and bullets. Because they distract, they blur the senses, throwing smoke in our eyes and leading us on the wrong path. And while we fail to understand, the real enemy continues to kill and kill, laughing, making fun of us while it tries to destroy us.

I don’t know what to do. I don’t know yet. It's too early. And I prefer to watch and learn before doing, writing, speaking.

What I can do, instead, is send out a prayer to those who lost their lives in a war that that they had not chosen to fight.

Today I am with Paris, I am with France. I share the weight of the grief of my brothers who, in this moment, are in a cold room of a mortuary, and must find the strength to say: '' That's my father, my son, my sister, my friend '', pointing at a body lying helpless on a metal table, half covered by a sheet soaked in blood.

For all that matters… you are not alone. We are with Paris. We ARE Paris. Now and tomorrow, until the day this foolish massacre comes to an end.

The Love Series Podcast - Episode 1: "Mirror, mirror on the wall..."

October 16, 2019
Nightmare scenario: have you ever met someone from online to find out that they look... NOTHING like the pictures? Host Valerio Esposito talks us through the scary world of millennial dating: from first-date horror stories to the most common myths on conventional attractiveness and dating "out of your league". Click on the following links to Episode #4 of  The Love Series Podcast
Post a Comment
Read more

The Love Series Podcast: "It's Ok He Already in My DMs"

March 28, 2020
Host Valerio Esposito speaks to algorithm 'experts', Insta-celebrities and a scientist to learn the rules of love in the age of social media. From posting 'thirst traps' to sending tasteful nudes via sliding into someone's DMs, only one thing is certain: dating after Instagram will never be the same. Click on the following links to listen to Episode #5 of  The Love Series Podcast
Post a Comment
Read more

The Love Series: La (Not So) Dolce Vita

June 13, 2020
Being Italian has been the single most beneficial asset in my dating life. Growing up in Naples, I was just a guy. In London, I became a “charming” Italian guy. In Milan, my Neapolitan accent is a liability. In the UK, apparently, it’s the sexiest sound known to man (and woman), the immigrant version of the siren song.   After taking residence in the Big Smoke, I quickly realised that Brits have a very precise idea of the Italian man, made up of mainly preconceived notions. They’re harmless for the most part, certainly romanticised, often flattering, but prejudiced nevertheless.   You know what they say: if you can’t beat them, join them. And join them I did. I first came to terms with the extent of my super-power that one time in 2015 when I held the door for a middle-aged woman at a Pret in North London. I said something like “after you” or “good morning” and as soon as she heard the effortless way with which the Rs rolled off my tongue she almost dropped her butternut squash salad o
Post a Comment
Read more